So I am in the middle of doing this Master’s degree on Creative Media Practice and about to explore the future of media technology. It’s time to start my final thesis and am looking ahead. I want to look into the future of digital advertising where we will see the commercialisation of content across a fragmented range of viewing devices through location-based advertising.

So I am going to outline my thinking and throw it out here. Feel free to comment, critique, disagree – even call me a nutter – but join me in thinking this through and get that brain matter ticking over lest we all become like sheep to the slaughter.

This for me is why I signed up for this whole degree course, the rest was painful (but interesting) to get through… History is interesting, but I want to see stuff that’s next. I love technology. I stand up on stage and preach about technology. But deep within me I have a deep-rooted fear that is beyond a niggling.

You’ve seen Minority Report – where the billboards talk to people – and gets it wrong as it scans the wrong iris…? Science-fiction right? Wrong.

Advertising won’t be linked to Iris scans, it will be linked to little microchips sewn in your clothes hidden in your credit cards or mobile phones even under your skin. And its not future stuff…

But I have an issue.

I can see whats next, and think its opening up a huge can of worms and actually going to be human downfall – and even though i am sounding over-dramatic – I actually believe this to be very true. Not in science fiction kind of way, but in a factual, evidential point of view.

So here is my juxtaposition.

10% of all commercial turnover globally is spend on advertising. whether thats paying for the company car and cell-phone bill of salesman to a billboard, TV or online ad.

So internet-enabled TV ads will eventually mean real-time targeted ads in TV. Knowing that a French person is sitting in UK hotel room and he has a HSBC bank account, so I swap English UK barclays ad with French HSBC ad in middle of UK TV show? Does this appeal commercially? Will technology enable it to be so? Yes – I’m already running test with a company right now.

But how do i know you are in the room? Or even walking past that billboard?

By 2012, 5.9 Bn cell-phones contracts globally. GPS enabled. Locate you anywhere.
I can even track your children right now. 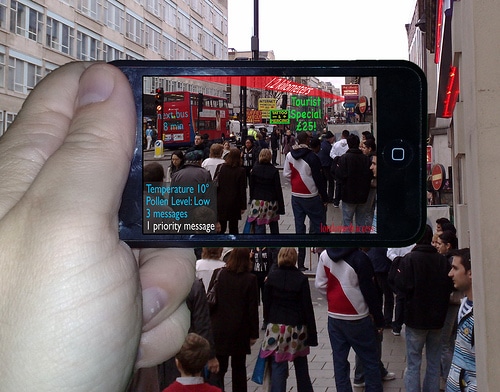 But we can move beyond mobile phones. Back in 2003 I first heard about commercially tracking individuals when Proctor & Gamble did display tagging tracking physical movement of items on shelves in stores and Walmart started to enforce all logistics suppliers to implement RFID. Radio barcodes that broadcast a persons and product position – uniquely – and is same technology inside every DART Tag system on roads, or Oystercards in London underground, inside cats microchips that cause cat-flaps to open only for them, etc, etc – and same thing thats is keyless fobs in cars and how billboards talked to BMW Mini owners…

My first blog post in 2006 as web came 15 and showed development for next 15 years time. This has been the exploration in my blog ‘NothingToHide.Us‘ since then.

On one hand you put product in fridge in Korea and it tells you sell-by dates or in /out of stock. Put in on kitchen surface near other items and it recommends recipes for you – put product in bin… and next TV ad says ‘buy more’ and adds to your online account… ok this is pushing Korean technology little further then where its at right now, but I can show evidence of this happening. Even washing machines knowing what product in them and adjust temperature automatically. This is M2M and its a reality in places like Korea and Japan – even Germany and UK – and not fiction. 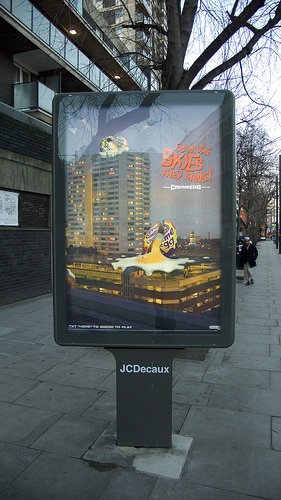 If i can save even a measly 0.5% of “global turn-over” for Coca-Cola by ‘knowing’ who is buying Pepsi or Coke and if they put one in a bin and serve them appropriate ad at right time are they interested? You betchya! Because they know between 50-99% of all ads they send out mass-media are wasted… All that junk mail ending up in the bin – and ‘targeting’ people will save a lot of companies a lot of money. Kerching!

I am talking 10% of global turnover for every brand is at stake to drive efficency. Its a huge commercial incentive. Get me to that board room.

Add to this ‘security’ measures of tracking people, lest 9-11 doesn’t happen again, and;

And as Chenoy of Nehru University sums it up;

“I don’t want to be paranoid,” he said. “But with many government schemes, a very good intention ultimately doesn’t always get implemented in the right spirit.”

So we currently see this biggest technology coo ever is being fought out in India right now where they want to electronic DNA every Indian person – 1/6th of planet – and IBM, Lockheed Martin, Microsoft are all bidding for multi-billion pound contract – the biggest technology contract in the world. Ever. Every person uniquely tagged.

Remember IBM started ‘computing’ in the first place by ‘counting people’ back in 1890 census. Did same in WW11 in Germany. Pitching for India, just won contract for the UK and now 2010 census in the US. (Did I mention Germany..?) Uh oh.

Nah, we never did really buy the whole “I think there is a world market for maybe five computers.” Thomas Watson, Chairman, IBM, 1949.

Anyway, what will this mean?

I link advertising to their cellphones or ID cards, I know who they are… where they are… suddenly personal ads… anywhere in the world on any device. Billboards, TV sets – in homes or back of Taxi’s.

Next stop microchip people like cats. Everyone. Everywhere. World is safer place. Cheaper for everyone as we save huge advertising resource. Doors open as you walk up to them. Your house or car or office door will open just like gates on underground. Wave your hand and pay for stuff like coffee in Starbuck’s and no cash or credit card means no-one can rob you. *cough*

(Thats right because technology makes world safer place and because people don’t hold up post-offices for a few grand with shot-guns means that people don’t clone credit cards and scam billions globally do they?)

Really. Microchipping people? Heck I can e-mark you with RFID with a simple invisible injection and you wouldn’t even know.

I am joking, right? Urmmm… One billion people to get biometrics and RFID tracking by 2015

So I have a business case – government backing – cool idea for implementation – safer world from security point of view – a global rush to adopt – an advancement of advertising technology – and your Orwellian nightmare where someone know everything about you and you are locked on a grid.

Wasn’t something written 2,000 years ago about not buying or selling without a mark of the beast? Some kind of global system constructed where sinister plan meets commercial opportunity targeted to human food supply? Go check Revelation 13.

Track people, make them wear a ‘yellow star or pink triangle’… future or past? Didn’t Hitler try this before trains sent people to death camps – where the state dictates behaviors they see are acceptable? Tried smoking in bar recently? Add tax to smokers cigarettes as they are problem for health authority? Link doctors notes to purchase to medical insurance… hmm possible vision of Microsoft and Google with HealthVault, etc? Cloud computing for your medical records that you wouldn’t need to submit to your insurance company… its all linked to your food purchases, etc. Loyalty cards and reward mechanisms hit the 21st century where price of food changes based on health records – fat people paying more for chocolate, but discount as regular shopper at Tesco’s… and the billboards and TV’s giving you ads about local health clubs or fat reduction pills… Welcome to a digital world of ubiquitous computing.

So I want to explore this – from both sides – positive and negative.

Some of which i appreciate may seem a long way off or even far-fetched. Some of which i can prove is closer then you think and already implemented and most people don’t even realise. Either way, you have to accept its ‘freaky’. Science-fiction versus historical facts. A lot to think through.

But bottom line, it’s just about joining all the dots – and that is what the Internet was invented for – to join dots across the globe.

And I really do hope I am wrong in my more ‘scary’ predictions, but I fear the hundreds of web links and 8″ high newspaper clippings I have at home – plus history of human dictator’s drive for world domination – may prove me right, timescales aside.

Maybe I should write a book? I’ll try to narrow it to 10,000 words… and focus in on the aspect as it relates to location-based advertising.