The Last Enemy – Living in the UK

The Last Enemy – Living in the UK

To my shame, I missed this when recently screened on BBC, but a friend alerted me to this timely TV mini-series about surveillance culture, who having listened to tireless ramblings in the past on my foresight on ID card technologies, was suddenly realising ‘tomorrow really is nearer then he thought’.

Not being good with the patient wait between drip-feed TV schedules, the release of the DVD suits my own viewing pleasure and a Easter break suited the five-hour personal screening. Here’s the synopsis:

The Last Enemy: Tomorrow is nearer then you think
After four years abroad, Stephen Ezard returns to London for his brother Michael’s funeral. National security fears have transformed Britain into a security state and U.K. citizens have their movements tracked by the government. Stephen finds himself in the midst of a conspiracy as he sets out to discover what really happened to his brother.

A timely and balanced pseudo-fictional piece set in the not too distant future in the UK. All citizens must now carry ID cards, and the government is successful in getting at least half the population to adopt them. Not being able to enter certain buildings or buy/sell certain items certainly puts the pressure for further adoption by the masses.

RFID (Radio Frequency Identification), the latest barcode technology tracking items from ‘field to fork’ has evolved into some kind of satellite surveillance tracking system and sits alongside a proposed super database called T.I.A (Total Information Awareness) which is trying to be marketed to the public as a way of further safe-guarding their own security. Conspiracy theories, Whitehall corruption, illegal immigrants, ID fraud and anti-ID movements all abound.

As you would expect, the series tries very hard to not tread on toes of predecessors such as ‘1984’ but did remind me of ‘Fahrenheit 451’ with its armed police patrols and inevitable iris scans of ‘Minority Report’, albeit with a lot more wooden acting and succinct jumps that were more like what one would see in ‘24’ then real human interaction. Phone someone, say your piece, hang-up –without so much as a hi or bye seemed to be a deliberate way to keep the programme succinct and fast-paced but to me felt it treated the audience in a condescending way.

Acting styles aside, what really was of interest to me was the handling of the technological realism and proposed advancements. I found a serious flaw. The blur between science fiction and science fact here was based upon a lack of understanding of what really is in place now and how this will evolve.

There was confusion between people needing to be maliciously tagged and bugged in order to monitor and/or control them and the T.I.A database, joining all the dots of separate informational monitoring in order to gain access to peoples routines and habits.

Oystercard’s – 10 million Londoners carry these RFID-enabled surveillance chips on their person and use them to enter the transport system every day – a back-door ID card that has been marketed en-masse and gone under the radar of most people as to its surveillance significance. 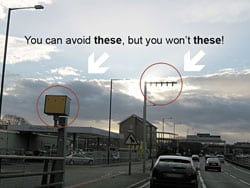 Drive down the A4 and see those new camera rigs overhead. DVLA’s new e-plate system that will pick up your RFID number plate from 300 yards and will cross reference vehicle licensing, insurance, and speed monitoring in the blink of an eye. Think you can speed up and slow down to avoid the cameras – insurance companies offering cheaper insurance for tagged cars and your inclusion of satellite navigation systems got rid of that a long time ago… See how many cameras are down the M6 toll-roads – why bother when the RFID-enabled average speed check is already in place.

This is just the surface…

I haven’t even started… 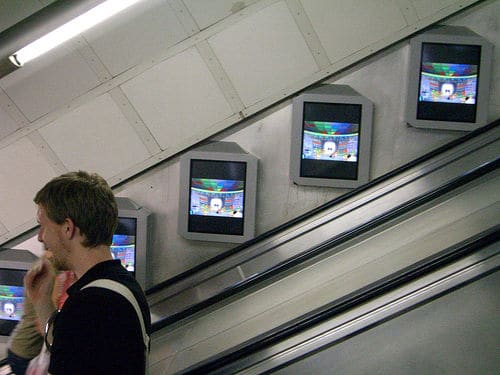 Wear your Nike Trainers as you buy a can of Coke in Tesco’s with Barclaycard, get on the bus with Oystercard, text a friend with your mobile phone, throw your can in the bin at home, get in your car and try and break the speed limit, even talk in the street, change your channel on Sky+, do a search on Google – I don’t need T.I.A to pull those things together and I certainly do not need to chip you to know who you are and what are the contents of your handbag… or what colour knickers you are wearing…

Technology makes me feel so safe. After all joining the dots is the answer to every paedophile and criminals dream, as well as every marketer and government official. Enough fear to make you adopt. Not enough to make you panic. That’s the game plan. Is Oystercard really ‘Faster… Smarter’? Do you really need to ‘Touch-in, touch-out’ for the system to read me – what a load of b*ll*cks…

Watch the Last Enemy but realise the only thing futuristic about it is the armed police on the UK streets.

Buy the DVD here and read what others have said here and here.

See the category on the top for more of my comments on RFID.