No Verichip Inside – How not to become your own worst enemy

Home/Advertising Technology, Future Projections, Privacy Control, RFID (Radio Frequency ID)/No Verichip Inside – How not to become your own worst enemy
Previous Next

No Verichip Inside – How not to become your own worst enemy

A smiling Gap employee appears on a giant flat-screen monitor just inside the store, greeting customers as they walk in. “Good afternoon, Mr. Yakamoto,” she says, loudly and cheerily. “How did you like that three-pack of tank tops you bought last time you were in?”

A science-fiction film it maybe, but that scene from the film Minority Report was based upon near-future technologies.

The ultimate solution for all advertising in way to effectively personalise content to you, will be in the linking of you to the advertising display vehicle.

By that I mean that as behavioural advertising (sequencing adverts based on your behaviour) and user profiling (understanding your preferences) gains prominence, signalled in part by Google and Microsoft’s $10B acquisitions in digital advertising technologies this year, somewhere in the not to distant future there will be a joining together of all the digital dots.

Your retina is not the key to all this, but little wireless ‘radio barcodes’ as Tesco’s likes to call them.

RFID (Radio Frequency Identification) is the new barcode. Invisible to the most part, embedded inside product packaging, inside your new passport, your Oystercard or new Barclaycard OnePulse – it can broadcast position of every single individual item (including you) within this world to readers upto 500 feet away. There will be no more privacy, everything – and I do mean everything – will have its own unique webpage plotting its entire history and movements from birth up until its death.

Where and when that can of coke was created, where it was transported to, how long it sat on the shelf, who bought it, when they drank it and where it is within your bin to be re-cycled… The product will speak to its RFID readers who in turn via the internet will signal advertising messages to be sent back to that consumer. All that needs to happen is to link you to the product. If an Oystercard or Barclaycard, which in essence is a backdoor national ID card to avoid mass consumer panic, hasn’t raised alarm bells, then the prospect of chipping every single person on the planet should chill your blood. Yes, I do mean putting a microchip inside your body. 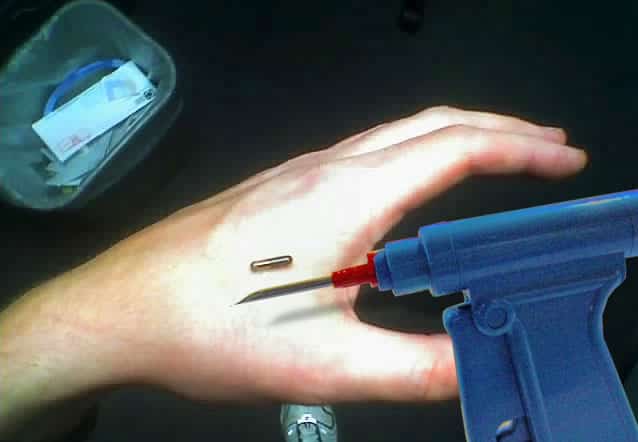 Think about it. Whatever your interests are, whatever purchases you have made, whatever your consumption habits, whatever your travelling habits, whatever communication methods you use, it is all going to be ‘listened to’ and tracked without wires and ultimately signal an advertisement directly personal to you – no matter which digital device you are in front of at any specific time, anywhere in the world; your mobile phone, your PC/laptop, your television screen, your GPS screen in your car, or the digital billboard you just happen to be passing.

Am I saying this loud and clear?

This is not science fiction, it is marketing fact and just a matter of time.

Take a flick through my blog and see what I am going on about, put the pieces together for yourself… All I am giving you are clues to which piece fits where in the jigsaw, but I am not going to finish it for you. Then if you have not bought it or read it yet, get a copy of Katherine Albrecht’s prophetic book ‘Spychips: How Major Corporations and Government Plan to Track Your Every Move with RFID’ or the very least check out the website. Though American in it’s approach and with behavioural targeting not having been so evident at the time of writing, am sure a revised version will not overlook this key component.

For those of you this side of the pond, consider the following.

In December 2005, The legislative body of the European Union passed the Data Retention Directive requiring telecommunication operators (including your local friendly ISP or mobile phone company) to implement mass surveillance of the general public through retention of metadata on telecommunications and to keep the collected data at the disposal of various governmental bodies for ‘substantially’ long times. Access to this information is not required to be limited to investigation of serious crimes, nor is a warrant required for access.

Let’s read an excerpt from paragraph 9 in the EU Directive.

“…everyone has the right to respect for his private life and his correspondence. Public authorities may interfere with the exercise of that right… in the interests of national security or public safety, for the prevention of disorder or crime, or for the protection of the rights and freedoms of others”

Someone, somewhere could decide your rights no longer exist, because someone else’s rights are more important then yours!

The EU government also has this thing called i2010. It is the first Commission initiative to be adopted under the EU’s renewed Lisbon strategy. It considers ‘convergence is to telecommunications what globalisation is to trade’. Their aim is to create a ‘Single European Information Space’ and they have €3.6 billion in funding to make it happen.

Checkout page 8 of the ‘The Challenges of Convergence’ discussion paper from the i2010 team.

Media Centre PC: They can also act as servers, giving you access to your own media and broadcast channels from every connected device in the world, be it over the web or on a cell phone, and they can even serve as home centrals for VoIP, home surveillance and intelligent house systems… to read RFID (Radio Frequency Identification) tags, for instance on clothes for automatic check on what type of program to use in washing machines.

While you are thinking entertainment and communication, the European government is already thinking of tracking you with RFID. Ask yourself why? Ask your self do you trust them? A lot of people trusted Hitler. Imagine Hitler having access to this technology. What do you think could happen? What do you think WILL happen?

When the bible discusses an anti-Christ it talks of someone who is not bright red with funny horns, but a character who emerges upon the world scene as an angel of light. He promises great things, does great things, but his prime goal is to destroy. He will lie, cheat and steal everything that you take for granted as a human and it will result in death – and separation from love in the most purest form. He will make Hitler seem relatively minor in comparison. Many people will be deceived and those who oppose him and his followers will be seen as the ‘problem’ and should be brushed aside, even eradicated. And it will all start by tracking you and your purchases.

The original ‘super-computer’ was designed for one purpose, to keep tabs on the population. When the 1880 census in US was taking far too long to process, it was Herman Hollerith who developed the Tabulating Machine to automate the process, starting his own business in 1896. By 1924 it became known as IBM – International Business Machines. It was these machines the Nazi’s used in the 1939 census that became the basis for a national register of Jews, as that year German census forms for the first time included explicitly racial categories. It was the use of punch card data (‘hole 3 signified homosexual, hole 8 designated a Jew, etc’) that became a key technology within Hitler’s holocaust.

IBM continued to develop improved tabulators until the invention of the electronic computer in the 1940s and it was just time before they became smaller, more powerful and more portable in the guise of a laptop, mobile phone and implantable-RFID chips. Whatever Hollerith’s original ideas and plans were for creating his device, history is proof enough that all governments gather information about their citizens and ultimately use it to shape and control society. The question is what happens when governments give way to a dictator with access to too much information with easy access to technology – on a global scale. After all, data equals power.

When the global greed ultimately sees a potential for getting more of your money by personalising adverts to you, reducing that 10% of any given companies turnover spend on advertising into more profits to its shareholders, when the government hypes up the fear and threat of an unknown enemy living next door, paving a way to listen in to every conversation in case they can spot a link, when you have been duped into ‘placing your clothes on a peg whilst you go have a shower’ as was the lie in Auschwitz, dare to ask yourself can you really believe blindly in everything will be ok and you have ‘nothing to hide’?

I tell you friends, we are on a hiding to nothing… 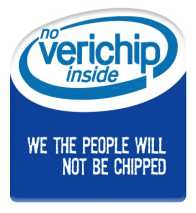 “The We the People will not be Chipped – No Verichip Inside Movement, is based on the irrefutable fact, that we believe in mankind’s inalienable human rights that are absolute and can not be debased, nor perverted. Human life can not be degraded to a 16 digit RFID chip number embedded under you skin under any circumstance. By uniting on this common ground, we can send a strong message to the IBM funded Verichip that we the people will not be chipped!”