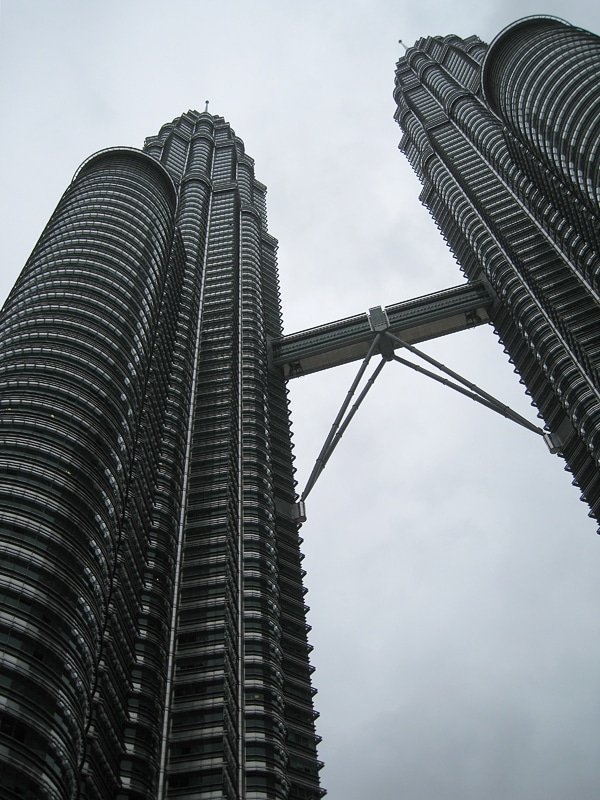 I started 2009 standing at the base of the Petronas Towers in Kuala Lumpur, Malaysia – the now second largest building in the world – admiring the magnificence of modern architecture rising 452m from the ground like two enormous steel stalagmites. Yet it was the Skybridge linking the two towers together that ultimately captivated my imagination. Not only marvelling at the technological achievements involved in the engineering feat of hoisting the bridge to the 41st floor to bring these two towers together, but also at the wisdom of safety therein – so should anything ever happen to one tower, there was a point of escape to the other tower at mid point. Having stood at gaping hole of ground zero in New York earlier in the year, I found myself wondering if such foresight in bridging those isolated twin towers could have saved even more lives back in 9/11… Surely there is a lesson to be learned here?

To date, digital media has single-mindedly pursed a new way of measuring the consumer experience at tangible touch points with new important metrics that challenge the status quo of advertising. Though often these metrics miss the holistic synergy of how multiple media exposures across all channels work together to build an overall pattern of how consumers move through a life-cycle; from awareness to conversion to advocacy. Like the Petronas Towers, media channels are needing to be linked together in order to work in unison as opposed to isolation to bring the conclusive results that marketers seek – and it is digital media that offers the tools to offer a new wisdom in how one channel could assist the other.

As we enter 2009 there’s a lot of confusion and uncertainty across the globe on many different counts, and none more so in the world of media – with more demands for justification for the remaining expenditure following budget cuts – advertisers are going to want to see real actionable results. There are many questions beginning to emerge in my own mind in terms of how we now move on; TV budgets are going to be under increasing pressure to justify performance in a way they have so far managed to avoid, for example. But what digital interactivity has shown is there a wealth of information about consumer behaviour that other media channels have never had the luxury of understanding – until now.

As opposed to working out the online equivalent to the mass media metrics like Gross Rating Point (GRP), I believe the shift this year will be more on how one channel supports the next as people move from awareness to investigation to purchase – ultimately what is the most effective and cost-efficient media mix in generating the maximum ROI with minimum outlay and effort – and advertising delivery technology is fortunately becoming smarter to be able to help answer this. From an online marketing perspective, the credit crunch is just going to escalate much of what was going to happen in time anyway.

2008 was a turning point for online without a shadow of doubt. We ended the year with an exciting integration of media; search, display, video irrespective of whether users were browsing, gaming or social networking. Complemented by delivery across of multiple range of viewing devices; from web browser and computer desktops to mobile devices – with an ever increasing awareness of TV and outdoor, as they too take a digital connection. Agencies are linking strategy and planning between on and offline more than ever, and technology products from vendors are becoming integrated and ramped up in order to give them the strategists the tools they needed to cross-analyse.

In order to succeed, things are going to need to change.

Accountability which is the mainstay of online effectiveness is going to have to go back to basics against tangible objectives as opposed to make shift hocus-pocus numbers we have all been justifying for the last decade. Ethereal numbers like impressions and clicks, will become more personable – how many people saw what and for how long and then followed by what did they do and where and on what device? It will shift towards from mere numbers towards a personal experience and learning’s on how to better target individuals within that consumer life cycle. Behaviourally targeted messaging is going to have to rise to the forefront in order to maximise the conversion effectiveness by knowing a little about where the consumer is at – or what they have previously been exposed to.

Tracking consumer behaviour across media channels is going to be re-evaluated and in some cases forcibly implemented back-end, and the technical push-back of inserting the right measurement points, will give way to the overall need to the necessity of underpinning the right foundations for growth. By this I mean an evaluation of current tagging methods and how all data can be pulled into a seamless report, and then viewed directly within Excel or PowerPoint.

The whole idea of isolated media campaigns having a similar creative theme will no longer be enough to justify the media expenditure. We need to raise our game. Ultimately breaking down the impression spectrum across the media schedule to enable us to see where people are at particular points then naturally persuade people towards conversion. Rather than having a single brand campaign followed by a DR campaign, for example – can the technology give insights into user behaviour prior to a creative being shown, in order to ensure a maximum effect upon a latter exposure and reduce overall media wastage?

Can we allow people to convert direct where they are within a banner and thus reveal a greater yield against a DR objective then merely click-thru? Can we bounce off search terms in order to show the next message in sequence or even see the change in search terms as a result of exposure to a particular display message? How does the personal web facilitated by mobile fit in to the conversion cycle? What about inGame and InStream video, and will these opportunities finally move beyond mere re-purposed TV commercials to facilitate viral aspects, widget grabs or even interactive video in situation in order to drive deeper emotional connections with a brand beyond mere linear story telling?

For some this will be ensuring interactivity in situation within a single creative execution, carefully placed and timely targeted, will ensure the user has an option to respond right where they are – and an increased willingness to do so as the message seems ever more relevant. This it will ensure DR aspects of advertising will lift the overall ROI and ensure a single campaign could deliver both brand and DR components within a single media buy as the technology changes the creative messaging per exposure.

But for those consumers not ready to be converted immediately, and need multiple exposures across media channels, sequencing messaging though video streams, gaming, desktop messaging and mobile – facilitating the tear-and-share brand advocacy that widgets bring to social networks – modern advertising technology doesn’t just facilitate but also helps track and monitor to varying degrees.

Whether a consumer is exposure outdoor who then turns to the personal web on a mobile, just because it’s handy; whether they are exposed on webTV or playing an online game followed by an immediate involvement via laptop; as people respond to the visual stimuli and then feel compelled to search for further information about the brand or product we are going to become more effective at assisting this conversion process.

The ability to see and control subsequent exposures whether in a browser, a desktop or on a mobile – integration with communication channels from mail to messenger; discussion and feedback within social networks – it is in understanding how all these connected points of consumer investigation prior to purchase that are at the heart of the development of the Eyeblaster Channel Connect strategy. It is bringing the open source concept of the original web, connecting multiple points together for the benefit of the whole, but from a commercial viewpoint.

If anything, social networking and buzz marketing is highlighting this shift into understanding people likes and objections and the need to listen to consumers closely and then turning this into a marketers advantage. Perhaps this will eventually lead to buying people’s time and interests as opposed to mere exposure?

With Channel Connect now integrated with Eyeblaster’s Advertising Campaign Manager, seeing the correlation between standard display, rich media, video, gaming and mobile is just the start of building those sky bridges between the isolated media towers as we move ever closer to the consumer utopia that marketers seek.